The eagle ray is bentho-pelagic*, it swims preferentially near the bottom. Its bathymetric distribution extends from the surface to a depth of about 300 meters. Even if it can be found in open water and near the surface, it mainly likes the proximity of the coasts on sandy bottoms.

Myliobatis aquila is a ray easily identifiable by its prominent snout with a rounded rostrum which earned it its name of eagle. Its head, which laterally bears a pair of prominent eyes and, posteriorly, a pair of broad spiracles*, is elevated relative to the rest of the body. The mouth and the five pairs of gill slits are ventral. The dorsal side is dark (brown to black), the ventral side is white. It has two pointed pectoral fins, commonly called « wings » and which, seen from above or below, give it a diamond shape. It also has a pair of quadrangular-shaped pelvic fins, as well as a short, receding dorsal fin, located at the base of the tail. This one, in the shape of a whip, is very thin and is on average twice as long as the body.
The eagle ray can measure up to 183 cm long with a wingspan of one meter

EAGLE RAY
Myliobatis aquila
English Channel, North Atlantic, Mediterranean, South Africa
IDENTIFICATION KEY
Large pointed pectoral fins
Protruding, rounded
snout Very fine whip-shaped tail, twice as long as the body
1 or 2 notched spines near the base of the tail
Face dark dorsal fin (brown to black), white ventral side
Max size: 183 cm, max wingspan: 1 meter
NAMES
Other common French names
Sea eagle, common eagle, sparrowhawk, ferrazo, glorious, swallow, lancet, mourine, mourine eagle, noctule mourine, pesce rato, ratopennado, tare, mowed land
Noms communs internationaux
Eagle ray, spotted eagle ray, common eagle ray, sea eagle.
GEOGRAPHICAL DISTRIBUTION
English Channel, North Atlantic, Mediterranean, South Africa
DORIS areas: ● Europe
● Indo-Pacific,
○ [Red Sea]
The species is common along the European coasts from the west of the British Isles to the West African coasts (Ghana). It is present on all the islands located off these lands (Azores, Madeira, Canary Islands, Cape Verde, etc.) as well as in the Mediterranean. The eagle ray is also present in the south of the African continent, from Namibia to Mozambique.
LOOK-Alike SPECIES
In Europe, confusion is unlikely.
Let us mention the cow-eagle, Pteromylaeus bovinus (E. Geoffroy Saint-Hilaire, 1817), present in the Mediterranean (and on the eastern Atlantic coast from Portugal to South Africa), which differs from the eagle ray by a side dorsal mottled brown.
DIET
The eagle ray has a carnivorous diet: it feeds on crustaceans and molluscs (gastropods, bivalves, cephalopods) which it captures in the sand. It is able to detect the vibrations of its prey in the sediment and only has to extract it using its fins and projecting a jet of water directed through its mouth onto the sand.
Occasionally, it can capture worms (polychaetes, nemertes…) and also fish.
The mouth of the ray is equipped with one to seven rows of contiguous teeth forming a dental plate, which allow to effectively crush the carapaces and the shells.
REPRODUCTION – MULTIPLICATION
Reproduction is sexual. It takes place in shallow water and near the bottom. The sexual maturity of the males is reached for a size of 40 cm and that of the females 60 cm. During mating, the male keeps his partner immobile by biting her pectoral. Belly to belly, he introduces one of his pterygopods* into the genital tract of the female. This coupling is very short (30 seconds to 2 minutes), the female being able to mate successively with several males.
The species is ovoviviparous*: in late spring or early summer, females give birth to 3 to 7 perfectly formed young after a gestation period of 6 to 8 months.
ASSOCIATED LIFE
During hunting season, all sorts of freeloading fish closely follow the eagle ray and take advantage of its movement to catch small prey exposed by its swimming over the sand. 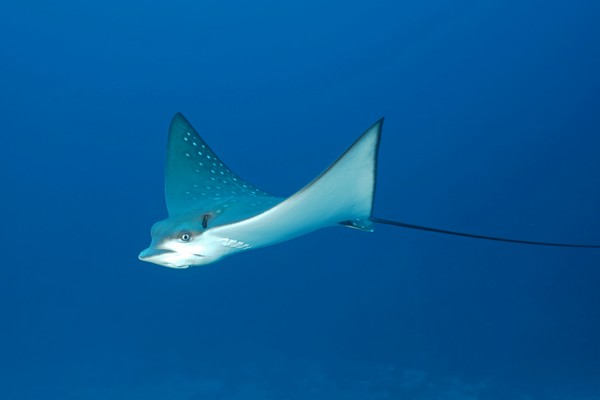